A pious association dedicated to assisting the poor souls in Purgatory. 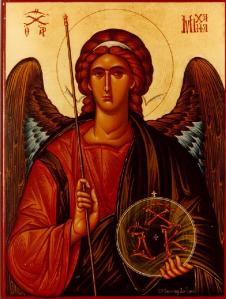 The New York Purgatorial Society is a pious association dedicated to assisting the poor souls in Purgatory, under the patronage of St. Michael the Archangel. Members assist at Mass (Usus Antiquior) on the last Monday of every month at St. Agnes Church (143 East 43rd St., between Lexington Ave. and Third Ave.) and pray daily for the repose of the souls of the faithful departed (one Our Father, one Hail Mary, and one Glory Be). A Solemn High Mass with polyphony is offered annually on the feast of All Souls.

To become a member, write to nypurgatorial [at] yahoo [dot] com. There is an annual membership fee of $30 which defrays the cost of the choir at the Solemn High.

—from The Catechism of the Catholic Church

•1030- All who die in God’s grace and friendship, but still imperfectly purified, are indeed assured of their eternal salvation; but after death they undergo purification, so as to achieve the holiness necessary to enter the joy of heaven.

•1031- The Church gives the name Purgatory to this final purification of the elect, which is entirely different from the punishment of the damned. The Church formulated her doctrine of faith on Purgatory especially at the Councils of Florence and Trent. The tradition of the Church, by reference to certain texts of Scripture, speaks of a cleansing fire:

“As for certain lesser faults, we must believe that, before the Final Judgment, there is a purifying fire. He who is truth says that whoever utters blasphemy against the Holy Spirit will be pardoned neither in this age nor in the age to come. From this sentence we understand that certain offenses can be forgiven in this age, but certain others in the age to come.”

•1032- This teaching is also based on the practice of prayer for the dead, already mentioned in Sacred Scripture:

”Therefore [Judas Maccabeus] made atonement for the dead, that they might be delivered from their sin.” From the beginning the Church has honored the memory of the dead and offered prayers in suffrage for them, above all the Eucharistic sacrifice, so that, thus purified, they may attain the beatific vision of God. The Church also commends almsgiving, indulgences, and works of penance undertaken on behalf of the dead:

Let us help and commemorate them. If Job’s sons were purified by their father’s sacrifice, why would we doubt that our offerings for the dead bring them some consolation? Let us not hesitate to help those who have died and to offer our prayers for them.” (—St. John Chrysostom, Hom. in 1 Corinthians 41, 5: PG 61, 361; cf. Job 1:5.)”

No comments are posted or read Cancel reply